On January 18, 2019 we helped our beloved 15 y/o miniature schnauzer cross the Rainbow Bridge.

As we were walking out of the house, we stopped to let 4 month-old Mollie and 13-year-old Ace say any sort of goodbye. I wondered if they could tell or smell what was happening.

I’m a firm believer that dogs can sense our emotions. So why wouldn’t they sense the sadness emitting off us when we returned minus a pack member? Ace shows no outward signs and he’s been with Max for the past 8 years. Mollie, however, is a different story. She’s only 4 months old. We’ve only had her since November. The most interaction Mollie and Max had in that time was some serious sniffing sessions and a couple times Mollie got in Max’s face to see if she could engage him. So why was Mollie subdued and not eating?

We became concerned that she had eaten a rock or something while in the yard and made a call to the vet. The vet asked when we noticed the changes with Mollie. Well, we were in the midst of a food change as well.  Saturday morning, she was NOT interested in her food at all. At puppy school (Mollie is the one pup I previously mentioned that needed a class), she ate her treats and there were no issues with elimination. Our normally rambunctious puppy was now a sweet and cuddly puppy and while we enjoy the cuddles, we were concerned.

Our vet put our minds at ease.  As long as she was subdued and not lethargic and that she was having bowel movements in addition to eating treats and some of her kibble, she was mourning. She sensed a shift in the energy of the house and even though her interactions with Max were brief, she was aware that a member of the pack was no longer there.

Luckily this has since passed.  Mollie is her normal puppy self and enjoying her new food. Ace is losing weight. He hasn’t stopped eating.  He loves eating! He gets so excited when it’s time to eat. Is he losing weight due to mourning? His energy level isn’t as active as it once was which is odd considering he now has another dog to chase and play with.

As with humans, each dog mourns in different ways. 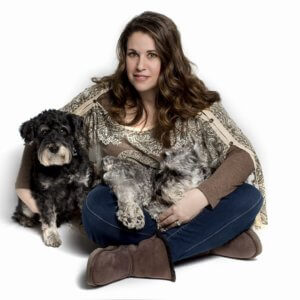